FOURTH SUNDAY AFTER THE EPIPHANY 2023

EASTER OUT OF SEASON

THE CONVERSION OF SAINT PAUL
January 25
(First posted in 2007) 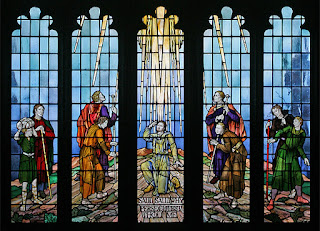 When the Lord appeared to Saul, and made him an eyewitness of the resurrection, many things changed in his understanding. His righteous act of persecuting the Church was revealed to have been the sin of persecuting the Messiah himself, his own self-attained righteousness was shown to be a delusion, the curse that was evident in the manner of Jesus’ death was revealed to be atonement paid by the Righteous one for the many sinners, thus taking away the curse to give us the blessing promised to Abraham to people of every time and place, and the prophecies of scripture were revealed to have been speaking of two comings of Messiah, not one. How much of this was clear immediately and how much had to develop over time as he thought about it, is not clear. But, right away, in his conversion, is the revelation that would become Paul’s bold teaching about faith in Jesus Christ and the grace that he gives, himself our only Salvation.
﻿﻿BORN OUT OF DUE TIME
﻿Every winter on January 25th traditional churches celebrate the Feast of the Conversion of Saint Paul. On that day we remember the story recorded in the Book of Acts, the history of how the persecutor of the Church saw the risen Lord Jesus Christ and became a convinced preacher of the Gospel. And, as we remember the conversion of the Apostle, we are presented with a puzzle that requires a little bit of explanation. The traditional calendar contains four colors, one of which applies to each day of the year (sometimes two colors on certain days).

The current challenge to the truth of the Gospel, coming from a school of philosophy that pretends to be a school of science, which includes the New Atheist movement, contains an evaluation of what sort of God, God ought to be. The challenge may seem to be an apologetic against any concept an Intelligent Designer, since that is how it is being presented currently. It argues that the world is less than practical and efficient. The argument has developed along lines of philosophy, particularly of Ethics (part of the larger discipline of Philosophy). It contains criticism of such details as the design, or rather (seeing that it is difficult to come up with a phrase to fit the argument) the shape and form of the human back.

What the argument boils down to is simply this: If the universe were created, it ought to have been designed better, so as to be more congenial to the people who have to live in it. Therefore, it could not have been designed. This assumes that the critics of God, those who have placed Him in, as C.S. Lewis put it, the dock, are correct about what would be the best way to go about making a world and its creatures. And, assuming their way is the better way, the argument is one of Ethics, that God ought to have made a better world, one that gives more consideration to our needs, and that demonstrates kindness on the Creator’s part. Furthermore, the whole scheme of this Ethics argument depends upon the Christian and Jewish paradigm of goodness. It requires, to summarize the Torah, not doing what is odious to others, as Hillel taught, and doing to others what we would have them do to us, as Jesus Christ taught. It also is based on opinion of what constitutes the ideal world instead of objective and empirically established fact.

The Church’s use of white for the Feast of the Conversion of Saint Paul points to the answer, summoning to the mind very strong accounts of reported history as contained in the Bible. It points to the testimony of eyewitness, in some cases to the testimony of martyrs. The message does not claim to answer any questions about what the Creator ought to have done, but instead it reveals how he has intervened in human affairs. It is fact based, not logic based. That is, it does not come to us as a result of reasoning through to a conclusion, but of accepting reports of fact. The only use of logic that we may use, in this case, begins with the facts rather than with mere conjecture, and builds on those facts.

We have been given a set of facts that rightly include both revelation and history. Revelation, because God has acted in such a way that the truth has been made known; and history, because the facts are recorded as eyewitness accounts. Testimony of this type constitutes evidence, and the record of it constitutes history, both of which are far more in the nature of science than of philosophy. Understanding its meaning is part of philosophy (the love of wisdom, certainly affirmed in Scripture, particularly in such books as Proverbs); but identifying facts must come before logic can be applied. The Christian message treats as irrelevant arguments that place God in the dock and judge His existence by mere human conjecture. Instead, it simply states a testimony, that of the eyewitnesses who saw the resurrected Jesus Christ.

From the facts of their testimony, and the fact that it was their testimony unto death, we draw logical conclusions about the sort of God that God is, rather than trying to figure out what He should be. So, we come to what may be called “The Gospel according to Paul.” This is in the fifteenth chapter of I Corinthians, vs. 1-11. In this passage he declares to them the Gospel he had preached to them, and urges them to be faithful to it. After reminding them that Christ died for our sins, was buried and rose the third day, all in fulfillment of Old Testament prophecy, Paul gives a list of several eyewitnesses who saw the Risen Christ. All of these witnesses saw Him between the first Easter and the day of His Ascension. That is, except for one. The last witness who saw the resurrected Christ was Saint Paul himself, significantly later than the others.

The last appearance was to Saul on the road to Damascus, the day of the conversion of Saint Paul. The traditional celebration calls for white as the Lord’s color, white for Easter, though it falls in the season of Epiphany. It is Easter out of season, because of Paul’s own words: “And last of all he was seen of me also, as of one born out of due time.” (v.8) The Church is teaching us that this day, the day of Paul’s conversion, is about another eyewitness to the Risen Christ. He was seen alive after His death, and the Gospel is not complete without the proclamation that witnesses gave us this testimony, reporting facts as they knew them.

We are certain that in those facts every philosophical question related to the Gospel, indeed about life and creation, can be answered. But, the Christian message is not that we can figure out what God ought to be like, and then pronounce a verdict either on him or his existence. The Christian message is the Gospel as preached by eyewitnesses who proclaimed the revelation of God in Christ as historical fact, a testimony that was worth dying for. In this sense, the Christian Gospel is a matter of historical fact . To those who want to begin with their opinions and speculations, the answer of the Church is that we begin elsewhere; we begin with the facts. This testimony of the eyewitnesses is why, if you enter a traditional church on January 25th, you will see the priest and the altar vested in white.
Posted by Fr. Robert Hart at Wednesday, January 25, 2023 No comments:

SERMON OF THE BLESSED VIRGIN MARY

SECOND SUNDAY AFTER THE EPIPHANY

You may use the link below for the video (Collect, readings, and sermon) from this morning.
CIRCUMCISION OF CHRIST 2023
To send a contribution to this church you may use the Pay Pal link below.