The Assize Sermon 175 Years On 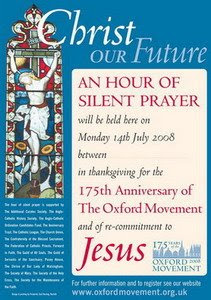 Forward in Faith is delighted to commend to all its members, supporters and friends the Day of Celebration and Prayer which will take place on 14th July, to mark the 175th Anniversary of the Assize Sermon.

The organisers write: On 14th July 1833 John Keble, scholar, priest and hymn writer, preached a sermon which was to start the Oxford Movement in the Church of England. It was to have an effect beyond his imagining. John Newman, Richard Hurrell Froude, and William Palmer, joined with Keble to publish a series of Tracts for the Times and were later joined by Edward Pusey.

On Monday 14th July 2008 you are warmly invited to join in an hour of silent prayer which is being held to mark the 175th anniversary of the Oxford Movement and of the Catholic Revival in the Church of England.

As we pray to God on 14th July, it is our aim not merely to commemorate the events of the past, but also to listen to God and to pray for His help to discern and carry out His will in our own generation . . . (continued here.)

We hope that Forward in Faith Parishes all over the world will commit themselves to this hour of silent prayer and add their names to the ever-growing list of Churches taking part by sending an email to admin@oxfordmovement.org.uk , giving the name of the parish, the diocese in which it is located, and the (local) time at which the hour of prayer will commence.
Posted by Albion Land at Friday, May 23, 2008