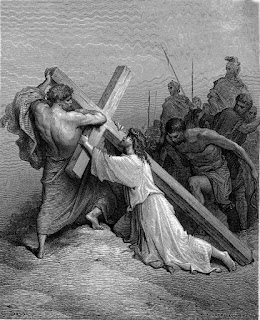 And as Jesus was going up to Jerusalem, he took the twelve disciples aside, and on the way he said to them, "Behold, we are going up to Jerusalem; and the Son of man will be delivered to the chief priests and scribes, and they will condemn him to death, and deliver him to the Gentiles to be mocked and scourged and crucified, and he will be raised on the third day."

Then the mother of the sons of Zeb'edee came up to him, with her sons, and kneeling before him she asked him for something. And he said to her, "What do you want?" She said to him, "Command that these two sons of mine may sit, one at your right hand and one at your left, in your kingdom." But Jesus answered, "You do not know what you are asking. Are you able to drink the cup that I am to drink?" They said to him, "We are able." He said to them, "You will drink my cup, but to sit at my right hand and at my left is not mine to grant, but it is for those for whom it has been prepared by my Father." And when the ten heard it, they were indignant at the two brothers. But Jesus called them to him and said, "You know that the rulers of the Gentiles lord it over them, and their great men exercise authority over them. It shall not be so among you; but whoever would be great among you must be your servant, and whoever would be first among you must be your slave; even as the Son of man came not to be served but to serve, and to give his life as a ransom for many." – Matthew 20:17-28 RSV
__________________________________

For the above quotation I have chosen to use the Revised Standard Version (RSV) translated in the 1950s rather than the Authorized Version of 1611, strictly because I wanted the word “servant” rather than the word “minister.” Granted, in 1611 it was understood that “minister,” as a noun, and “servant” were synonyms, and that “minister” as a verb, and “serve,” were also synonyms. The word translated “servant” in this passage is διακονέω (diakoneo) from which we get the English word “deacon.” It may seem doubly ironic that I chose a word other than “minister,” that is, for any who either never knew or have forgotten that when we call a man a deacon it is the same as calling him a servant.    In a sermon I once wrote for Palm Sunday, expounding on the great Christological passage in Philippians chapter two, I related this story: “In a rather unhappy conversation with a man who aspired to be a priest, I asked the question, ‘What is it that you want?’ He answered me, ‘I want to be a priest; in fact, I want to be a bishop.’ He even said, ‘Isn’t it right to want to get to the top of your field?’ I told him that he should forget the whole idea of Holy Orders for himself. I said I would not help him with it at all. I went on to explain to him that this is not about ambition. Every priest, including the Archbishop, is forever a deacon, that is, a servant. He said that he had never heard that before. Had he not read what  tells us? ‘Let this mind be in you, which was also in Christ Jesus.’ In fact, that is for everyone.”
What we see in the Gospel passage, in the way that St. Matthew placed these two events together in succession, is a very clever use of irony by the former tax collector turned Apostle. In the much the same way St. Luke writes about the other passage in which Jesus said much the same thing to the Apostles as in what we read above. That is because, after telling them that He was about to be handed over to the Gentiles, and that one of them would betray Him to the terrible suffering and death that was now upon Him, we read, “And there was also a strife among them, which of them should be accounted the greatest (Luke 22:24).”

Lifestyles of the rich and famous – and powerful
In the 1980s, or perhaps 1990s, a weekly television series caught the attention of people who, as I overheard from time to time, discussed it in their places of employment. The name of the program was Lifestyles of the Rich and Famous. I never saw it, but I recall people being enraptured about what they had seen. The world, after all, has a value system in which riches, fame and, if I may add one more category, power, are in themselves the zenith of success. Or, to mention the same things, in terms of their spiritual substance, with the words of , “The lust of the flesh, the lust of the eyes and the pride of life.”
“Love not the world, neither the things that are in the world. If any man love the world, the love of the Father is not in him. For all that is in the world, the lust of the flesh, and the lust of the eyes, and the pride of life, is not of the Father, but is of the world. And the world passeth away, and the lust thereof: but he that doeth the will of God abideth for ever (I John 2:15-17).”
It did not escape Patristic notice how those three things line up with the very first temptation mentioned in scripture. “And when the woman saw that the tree was good for food, and that it was pleasant to the eyes, and a tree to be desired to make one wise, she took of the fruit thereof, and did eat, and gave also unto her husband with her; and he did eat (Genesis 3:6).”
Those things must be overcome in our hearts if we are to be Christ’s disciples. As much as modern Americans see the Church in terms of shopping and selecting only desired items, and as much as the clergy are tempted here to become competing salesmen in this awkward sort of emotional-religious retail, in reality the Church, wherever she is true to her Lord, has but two things: Discipleship and sainthood.
“And the disciples were called Christians first in (Acts 11:26).”
“Unto the church of God which is at Corinth, to them that are sanctified in Christ Jesus, called to be saints, with all that in every place call upon the name of Jesus Christ our Lord, both theirs and ours (I Corinthians 1:2).”
The Christian life is a call to sainthood, which means simply holiness. Holiness means two things: Both that we avoid willful sin, and that we cultivate the virtues that grow in us by the grace of God, given to us by the Holy Spirit (Galatians 5:16-26). The only method is discipleship, and we cannot be disciples without taking up, each of us, our own cross and following the Son of Man. “And he said to them all, If anyone will come after me, let him deny himself, and take up his cross daily, and follow me (Luke 9:23).”

Blessed Subversion
It is not possible to be Christ’s disciples if we have the same value system as the World; that is as St. John uses the word “world,” both in the Epistle passage we have read, and in the opening of his Gospel: “He [the Word or Logos] was in the world, and the world was made by him, and the world knew him not (John 1:10).” In our own time I see a troubling confusion among many American Christians. I have written quite a bit about the problem of churches that are given over to overt heresy, immorality and apostasy. But many American Christians who remain either orthodox, or traditional or Evangelical, demonstrate by their public statements an inability to distinguish between the spirit of the world and the Spirit of Christ. In a world that prizes riches, fame and power, taking up the cross of Christ is entirely contrary. We follow Christus Contra Mundum, that is, in terms of the world’s upside down values, Christ against the world.
Beginning a few decades ago American Evangelicals began pushing the idea of “Leadership.” In daily mail to the church, among colorful glossy advertisements that I throw away every week are items about conferences with high sounding names like “Raising the Next Generation of Leaders.” How very contrary to the Lord who said, “It shall not be so among you.” Where are the conferences for Raising the Next Generation of Servants? Churches advertise (in a manner most insulting to traditional liturgical churches) their “Passion,” their “Power,” and their “Lively” services – which appear to be mostly entertainment. But disciples have no power in and of themselves, put no confidence in the flesh (Philippians 3:3), and must take up the cross daily to overcome themselves.
The irony about which Matthew and Luke wrote, which Jesus corrected with His words that the greatest among us is a servant, is in striking consistency with the times in which we live. The twentieth century was a time of severe persecution for the Church, and it has grown more so since the turn of the millennium. Every day Christians face persecution, and in many cases poverty. Many are imprisoned, beaten, tortured or killed for their faith. In Touchstone, a Journal of Mere Christianity, every issue presents news about “The Persecuted Church.” How ironic, then, that in modern times many American Christians believe they will be “Raptured” before some seven year period of a “Great Tribulation” comes on the earth. Not only is that idea based upon a very poor interpretation of Scripture, but it is also a clear symptom of moral failure. If the Spirit of Christ is in them, how then can they fail to empathize with their persecuted brothers and sisters who live and suffer in other parts of the world?*
It is essential that we become utterly subverted, from the world’s upside down point of view, by the cross of Christ. It is impossible to prevail in the spiritual battle unless we accept His call to take up our cross, and follow Him as disciples. We cannot overcome the power of evil by the arm of the flesh, or by the methods of the world. We must despise the value system of the world, and become servants. We must take the lowest place. We cannot overcome the world unless we become incurably subverted by that which is eternal, the .
___


* About that error I have written before. See “Why I want to be Left Behind,” available in our own archives, and also on Virtue Online.
Posted by Fr. Robert Hart at Thursday, March 16, 2017