Epistle Study for the Fifteenth Sunday after Trinity 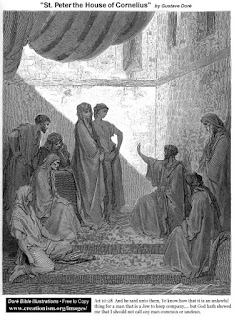 It may well be that ’s words in this Sunday’s portion of his Epistle to the churches of , sound a bit strange. All of this talk about circumcision contrasted against the cross of our Lord Jesus Christ, and people “glorying”- that is, in modern English, boasting- about the “flesh” of these Christians, may well confuse a new Bible reader. It can lead to mistaken ideas. The first mistaken idea is that whatever was talking about cannot be relevant to modern people. The second mistaken idea is that this provides a basis for an anti-Semitic interpretation of scripture. Another mistaken idea would be we have no need for the authority and teaching of the Church.


In fact, let me deal with this third mistake. In so doing, I will have already answered the others. Since we speak in the Creeds of the Catholic Church and of the Catholic Faith, which we believe, we are stuck with the Catholic Tradition- and thank God we are. The Nicene (/Constantinopolitan) Creed says, “I believe One, Holy, Catholic and .” Yes, we do believe in the Church, because Christ Himself founded it and is its Head. But, in this great Creed you say I believe the Church; I believe what it teaches.


The scripture, without solid teaching of what it means, can be taken captive by any kook, fraud or con-man. So, when we speak of the Catholic Tradition we must go back to the ancient times, those early centuries when the Church was under persecution, or just emerging from persecution. We are saying that we believe what Christ promised, namely that the Spirit of Truth would guide the Apostles into all truth (John 16:13). And, as that promise of Christ applies to this passage from Galatians, the young Church first had to deal with a heresy that came about so early in its history that we see it addressed by . When the Apostles and Elders gathered in , they also, with complete unanimity, addressed and refuted it (Acts chapter fifteen). This ancient heresy taught that, in order to be saved, a Gentile who converts to Christianity must be circumcised and live by all of the 613 commandments of the Law of Moses.


Trendy writers have sold the idea that some controversy raged over what to do with Gentiles converts. They sell the notion that this alleged controversy raged for years, even among the Apostles, pitting Paul against James, and maybe against Peter. They insist that we may infer, from this invented story of theirs, that important questions can go unresolved and debated within the Church for extended years before the Spirit leads us to a right conclusion. They use their false and contrived reading of the New Testament to justify new and outrageous ideas (including women's ordination and same sex blessings, etc.).


But, that tale of a raging and prolonged controversy is pure fiction; and so, like the future, it can teach us no lessons. What we really see in the New Testament is that the Proto-Council in was unanimous in its conclusion, without disagreement among the Apostles and the Elders. At the Council they unanimously affirmed the earlier decision recorded in the eleventh chapter of the Book of Acts, when they all agreed with Saint Peter that he had been right to baptize the new Gentile converts without circumcising them; because when the Holy Spirit came upon the Gentiles, gathered that day in the house of Cornelius, God made no distinction between Jew and Gentile. The immediate and unanimous Apostolic conclusion had been, at that time, “Then hath God granted the Gentiles repentance unto life (Acts 11;18).” So, when a new teaching – a heresy- arose, as Gentile Christians were troubled by unauthorized teachers who wanted them to be circumcised and to keep the Law, Saint Paul was in complete agreement with Saint James, and with Saint Peter, and with all the Apostles, that the Tradition of the Church’s Apostolic doctrine (new as that Tradition was, but established nonetheless) had to be defended. What Saint Peter had learned by Divine revelation years before, when Gentiles first converted to Christ, and what his fellow Apostles affirmed without argument (if you simply read the record in the Book of Acts), was the very same teaching proclaimed by Saint Paul, and the same teaching that the Council in Jerusalem upheld for all of the churches everywhere. In short, the New Testament does not show a controversy among the Apostles, but rather that they were in complete unity, agreeing among themselves concerning what it was that the Holy Spirit had revealed. And so, in the New Testament we see the Church teaching the content of Apostolic witness.

What does this mean for you? It means that what the Church has always taught since its earliest days, as recorded in Scripture, is to be believed. In this case, believe and know that you cannot save yourself by your own power. That first heresy, that we are saved by circumcision and by keeping the 613 commandments, suggests that we have the power to save ourselves without God’s help--that we can pull ourselves up to Heaven by our own bootstraps. It teaches that the flesh is strong enough to obey perfectly the Law by its own power (Romans 8:3, Acts 15:10).  A few centuries later, this same idea would reappear in another form from ’s very own heretic, a fellow named Pelagius. Pelagius taught that we can, without God’s grace, live holy lives simply by our own will power; that Christ came merely to be our example. The man who worked hardest to refute the heresy of Pelagianism was . He picked up the teaching of the Apostles back in the first Century, that we cannot save ourselves by our own power; that we need the grace of God.

Today we can speak of the heresies of the Judaizers and of the Pelagians with ease. But, think of what it meant for people back then to hear such teaching. What if Christ had come only to be the example of perfection? Would not we be without hope? We should all know about the problem of sin and death. Death is the flip side, and part of the problem, of sin; sin and death are two sides of one coin. One thing I do not need is a perfect example to make the sting of my condemnation worse. I need a Savior, both to rescue me from the reality of guilt (whether I have the good sense to feel guilt, or not), and to heal my fallen soul of its waywardness. Jesus the Good Example cannot save me; Jesus Christ, the Word made flesh, the Lord and Savior Who is One with the Father, forever God even as He takes into His own Person our human nature and redeems it, and by grace perfects it, can and does save me. And, no one else can; certainly I cannot save myself. In Christ, however, no longer am I bound for destruction, for an eternity of death without God. Rather, forgiveness is extended, along with grace and power by the Holy Spirit to be transformed, right up until that day when we are made partakers of the Divine Nature (II Pet. 1:4) because the One Who as God was made man, gives us even this very grace.


So, I trust you see that ’s words are very relevant to you.
Posted by Fr. Robert Hart at Thursday, September 10, 2015