Easter out of Season 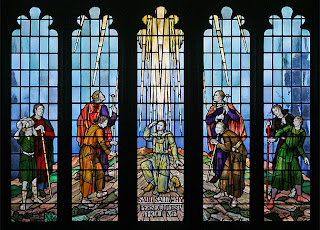 When the Lord appeared to Saul, and made him an eyewitness of the resurrection, many things changed in his understanding. His righteous act of persecuting the Church was revealed to have been the sin of persecuting the Messiah himself, his own self-attained righteousness was shown to be a delusion, the curse that was evident in the manner of Jesus’ death was revealed to be atonement paid by the Righteous one for the many sinners, thus taking away the curse from those who deserved it, and the prophecies of scripture were revealed to have been speaking of two comings of Messiah, not one. How much of this was clear immediately and how much had to develop over time as he thought about it, is not clear. But, right away, in his conversion, is the revelation that would become Paul’s bold teaching about faith in Jesus Christ and the grace that he gives, himself our only Salvation.

The last appearance was to Saul on the road to Damascus, the day of the conversion of Saint Paul. The traditional celebration calls for white as the Lord’s color, white for Easter, though it falls in the season of Epiphany. It is Easter out of season, because of Paul’s own words: “And last of all he was seen of me also, as of one born out of due time.” (v.8) The Church is teaching us that this day, the day of Paul’s conversion, is about the Risen Christ. And, not simply about Him in a theoretical sense, but in a historical sense. He was seen alive after His death, and the Gospel is not complete without the proclamation that witnesses gave us this testimony, reporting facts rather than trying to figure out answers to philosophical problems.

We are certain that in those facts every philosophical question can finally be answered. But, the Christian message is not that we can figure out what God ought to be like, and then pronounce a verdict either on Him or His existence. The Christian message is the Gospel as preached by eyewitnesses who proclaimed the revelation of God in Christ as historical fact, a testimony that was worth dying for. In this sense, the Christian Gospel is far more a matter of fact and history than it is of philosophy. To those who want to begin with their opinions and speculations, the answer of the Church is that we begin elsewhere; we begin with the facts. This testimony of the eyewitnesses is why, if you enter a traditional church on January 25th, you will see the priest and the altar vested in white.
Posted by Fr. Robert Hart at Friday, January 25, 2013

As such, it explains the fallen nature of the world brought about by human sin. Paul describes this phenomenon in Romans, chapters 1-3.

There used to be some debate about whether this was the best of "all possible worlds." That debate, along with Darwin's attempt to devise a better Creator is fruitless because it ignores the way things are and wastes time attempting to talk about the way things should be.

The last chapters of the Book of the Revelation to John (particularly Ch 20-22) deal adequately with the way things will be when the real Creator brings history to a close. I submit no man can come up with a better ending than that.