Because of His Divine Person, in his human nature he is at once like everyone else, and yet not like anyone else 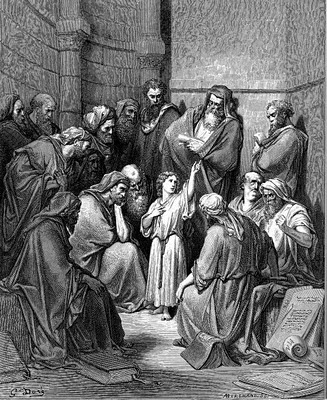 The focus in this season of the Epiphany is the revelation of the Word made flesh, and beholding his glory as of the only begotten of the Father, full of grace and truth (John 1:14). Each Sunday, for the first few weeks of this season, we will be told what can be seen, as in beheld, that reveals Divine glory in the man himself, the Lord Jesus. This Sunday is no exception.

Looking at Jesus at the age of twelve, I am reminded of something my friend, David Mills, once wrote in a large email discussion, commenting on the efforts by some writer named Ann Rice to create a biographical sketch of Jesus. About her efforts he wrote; "There is one Person whom we must not try to understand in terms of psychology,"-or words to that effect. How true. We are not in a position to analyze Jesus Christ, or to guess at motivation for his words and actions.

Once I heard the efforts of a priest to create a vivid picture, in some paper he wrote, about the Lord's time growing up and seeing suffering people, and wanting to do something about it, and so forth. He objected, after reading his paper, to my criticism that he had reversed the revelation of Scripture. I told him, "that is not the Word made flesh, but flesh becoming the Word. You have it all backwards." You see, Jesus did not acquire the motivation to become the Light of the World, rather He came into the world as its light. He did not undergo, as we must, a conversion. He came here to save us from sin and death.

Remember what I have said to you before: Only Jesus came into the world. The rest of us have our origin here. In His Person the Word is with the Father and with the Holy Spirit, eternal, uncreated, beyond our comprehension, hidden from the sight of mortal eye, pure and separate from all sin and evil, unknowable as dwelling in the darkness of mystery and in the radiant light of Divine glory. Every other nature is created, all we can know is from the things that are created. God alone is not created, and therefore no creature shares his nature as without beginning, without end, having neither parts nor passions, utterly transcendent above all we can know or even imagine.

And, so it is that no one ever came into the world except the One who created it. The glory of God is now revealed, and though we cannot comprehend Him in His Divine glory, we can know Him through His Incarnation. "And the Word was made flesh, and dwelt among us, (and we beheld his glory, the glory as of the only begotten of the Father,) full of grace and truth." So, we should not be surprised to find him as a boy, twelve years old, already possessing wisdom that astonishes the most learned rabbis and doctors of the Torah.

Once I heard a man preach from today's Gospel, and he commented on the bit near the end: "And he went down with them, and came to Nazareth, and was subject unto them." He preached, essentially, that his youth and inexperience had gotten the better of him, and he needed to go home and learn from the older wiser folks. That would be true concerning anyone of us, we who did not come into the world, but are from beneath. Not so the One who is from above, who is not of this world. The human nature he took was real, and was fully human. And, that human nature was able to grow in wisdom and in stature. But, the Person who took to himself fellowship with us by taking human nature, is, properly, God the Son One with the Father.

The human nature of Jesus was not subtraction (as some have misinterpreted self-emptying), but addition. Added to His eternal uncreated Person is the created nature we share. To fulfill the Law for us, yes he went back to Nazareth and was subject to his adopted father Joseph, and to his mother Mary. And, this he chose willingly, after demonstrating his wisdom by revealing just a little bit of it, and then choosing the way of obedience and humility. This was the choice he made from his internal strength, not dependence due to weakness. Because of His Divine Person, in his human nature he is at once like everyone else, and yet not like anyone else. And, that is what we must learn from today's selection of the Gospel According to St. Luke.

This humbling of himself, subjecting himself to parental authority, and remaining from that time out of public view, was all part of that perfect obedience to the Law by which he saved us from sin and death (that is, the Law of God given through Moses). For, in accepting a place of submission and humility, of obedience and even the role of a servant, he was already obedient, eventually unto death on the cross. This has everything to do with the fact that he, the one who had no sin of his own, identified with us, even with us sinners. In time he fulfilled this perfect obedience.

The curious phrase translated, "How is it that ye sought me? wist ye not that I must be about my Father's business?" is literally, "Why did you look for me? Did you not know I would be with my Father?" Some have rendered it, "in my Father's house?" This was not an enthusiastic youngster getting above himself. This was God the Son reminding them that He was here as the Son, eternally begotten of the Father. Yet, we see him descend, we see him go down from Jerusalem (for from Jerusalem, the Jews saw everything as descent). Today's Gospel reveals the path of descent which He journeyed for us. He went back with them, and was subject unto them, in perfect patience and obedience. This was not a person humbled by circumstance, but rather the Lord choosing to humble himself.

Let this mind be in you, which was also in Christ Jesus: Who, being in the form of God, thought it not robbery to be equal with God: But made himself of no reputation, and took upon him the form of a servant, and was made in the likeness of men: And being found in fashion as a man, he humbled himself, and became obedient unto death, even the death of the cross. Wherefore God also hath highly exalted him, and given him a name which is above every name: That at the name of Jesus every knee should bow, of things in heaven, and things in earth, and things under the earth; And that every tongue should confess that Jesus Christ is Lord, to the glory of God the Father. (Phil. 2:5-11)

Today's Epistle says: "I beseech you therefore, brethren, by the mercies of God, that ye present your bodies a living sacrifice, holy, acceptable unto God, which is your reasonable service." Reasonable service in the Greek is logika latre’ia (λογικv λατρεία). It is logical, or reasonable, to respond with worship, with liturgy. We will respond even in words, saying in our Holy Communion liturgy, "And here we offer and present unto thee, O Lord, our selves, our souls and bodies, to be a reasonable, holy, and living sacrifice unto thee."

Today's Epistle also tells us, "And be not conformed to this world: but be ye transformed by the renewing of your mind, that ye may prove what is that good, and acceptable, and perfect, will of God." So, part of this whole logical liturgy of offering our very selves to God is to love Him with all our mind, filling it with the word He has revealed in sacred Scripture, so as to follow the One who came into the world to choose us out of the world; in our minds transformed so as not to conform to the sinful world around us. For, unlike Jesus, we need conversion; we need to change, and we need to be saved from the sin and death of the Fallen world.

It may seem a big thing to give ourselves to God in a reasonable life of worship as living sacrifices; but, in so doing, as we are transformed with renewed minds, what we give back to God is gratitude by obedient cooperation with Him as He saves us from the darkness of sin and death. Even in giving ourselves to Him, we the are ones who receive a gift, the grace to be transformed as children of God unto eternal life.

This is why we focus in this season on who Jesus is. Soon we will focus on what he did for us and does for us. To understand that, we focus on the Word made flesh, and the glory he revealed from within Himself, the glory of His Divine Person.
Posted by Fr. Robert Hart at Saturday, January 09, 2010