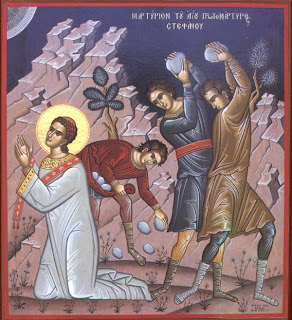 From my sermon for the twenty second Sunday after Trinity:

Ye stiffnecked and uncircumcised in heart and ears, ye do always resist the Holy Ghost: as your fathers did, so do ye. Which of the prophets have not your fathers persecuted? and they have slain them which shewed before of the coming of the Just One; of whom ye have been now the betrayer 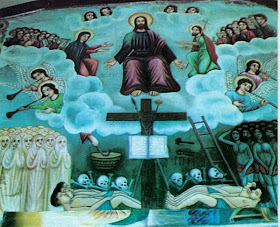 s and murderers: Who have received the law by the disposition of angels, and have not kept it. When they heard these things, they were cut to the heart, and they gnashed on him with their teeth. But he, being full of the Holy Ghost, looked up steadfastly into heaven, and saw the glory of God, and Jesus standing on the right hand of God. And said, Behold, I see the heavens opened, and the Son of man standing on the right hand of God. Then they cried out with a loud voice, and stopped their ears, and ran upon him with one accord, and cast him out of the city, and stoned him: and the witnesses laid down their clothes at a young man's feet, whose name was Saul. And they stoned Stephen, calling upon God, and saying, Lord Jesus, receive my spirit. And he kneeled down, and cried with a loud voice, Lord, lay not this sin to their charge. And when he had said this, he fell asleep. (Acts 7:57-60)

Saint Stephen had an advantage that Zechariah, centuries before, did not have. We do not criticize Zechariah for demanding justice when he died, because, unlike Saint Stephen, he could not look back to Jesus Christ on the cross. We all know the words from the Gospel of Luke: words spoken by Jesus as He was hanging upon the cross: “Then said Jesus, Father, forgive them; for they know not what they do.” The Word made Flesh, God the Son in His human nature, showed us what mercy truly is. We already knew that God, from heaven, forgives sins. God cannot be harmed, wronged or deprived of anything. Yet, as a Man, it is God who was mocked, beaten and crucified by sinful men, and who pronounced forgiveness. No angel can preach on this subject as well as you and I can, for it takes human frailty to speak of forgiving those who can cause us to suffer.

So we do not criticize the holy prophet, Zechariah, of the Old Testament; Instead, we see that Saint Stephen had even more grace, for he could look back to God the Son, in His human nature, forgiving the very men who were murdering Him, who were enjoying the spectacle of His suffering, as they displayed the depths of Schedenfreude. Saint Stephen could recall God in the flesh forgiving genuine pains that were inflicted upon His Person.

May our Lord Jesus, grant to us the joy that comes when we are free to love everyone, including those who have wronged us, with that charity placed within us by the Holy Ghost that that can, if we acquire it, make us perfect, as our Father in heaven is perfect. Amen