The following is in the current issue of THE TRINITARIAN, and is posted here with permission from the editor. 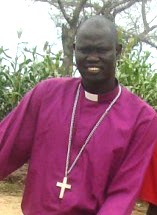 THE THIRD HORSEMAN UNLOOSED
By the Rt. Rev. Wilson Garang, Bishop of the Diocese of Aweil, Anglican Catholic Church

A humanitarian catastrophe has overwhelmed the Diocese of Aweil in , of which I am the Bishop Ordinary. People are not getting enough to eat, and many are dying. Recently, I returned from a visitation to my diocese, during which I got a first-hand look at the situation. I saw with my own eyes how desperate the situation is. It is a horrific picture. People are collecting wild leaves because there is nothing else for them to eat. Some have died falling from trees while trying to get leaves. The United Nations High Commissioner for Refugees (UNHCR) estimates that some 38,000 people have crossed the border into in search of food. Many thousands more may follow if nothing is done. Making things worse, unrest is growing in northwestern , where my diocese is located.


Mostly Christian and animist South Sudan began its descent into misery and chaos in late 2013, only five months after achieving independence from overwhelmingly Muslim North . Since then, the situation has gone from bad to worse. People continue to leave their homes, looking for safety and, above all, food. A global food security body has placed the number of people lacking adequate diet at 2.8 million out of a population of about 12 million. A recent news agency dispatch reports the arrival of nearly 6,000 South Sudanese refugees at two locations in North Sudan’s . And in , an average of 500 South Sudanese — or about 100 households — have been arriving daily. Many more are expected in the days and weeks to come. In addition, thousands of refugees, mostly children, have fled to , the news agency reports. The UNHCR says most arrivals have traveled up to four weeks before reaching their destination. They carry few personal belongings. Most are in poor health, many having risked their lives along the way. They need food, water and basic relief items, and they need help in reuniting with other family members. The situation looks to get no better. But a solution is hard to find. We all must pray for God’s help, and to make more people aware of the disaster that is unfolding day by day. Dear friends in Christ, please pray for the Diocese of Aweil and for its people. Pray for all South Sudanese. Pray that they may get their daily bread. Pray for peace. Amen.
Posted by Fr. Robert Hart at Friday, May 27, 2016

Is there any particular relief fund assisting in the situation? I can donate some money.

At this time I believe that the best way is to go to the St. Paul Mission Society webpage.
http://www.anglicancatholic.org/missionary-society-of-st-paul