Make no mistake about it; when the Holy Spirit was poured out on the disciples, the Church became the Body of Christ just as truly as Christ was born in . Our ministry as the Church is His ministry, as He extends His Incarnation through us, and goes about doing good not only as far as one man may travel, but into every place on earth, preaching the Gospel in all the world as a testimony to all nations, gathering out of all nations those who are His disciples. The Church, His bride and his Body, believes and does works greater in number, just as the disciple Elisha did twice the miracles of Elijah the prophet, when a double portion of the same Spirit rested on him. (II Kings 2:9f, John 14:12)

Among the many people in Jerusalem, who had come for the feast, were pilgrims from various nations, that is the God-fearers and proselytes who were born as Gentiles, and either had begun to convert to Judaism, or had fully converted. Also, there many Jews of the Diaspora who lived most of the time in foreign countries. Although just about everyone in the spoke enough Greek to get by, as it was the international language, these pilgrims heard the disciples speaking in the languages of their own distant homelands. Anyone with genuine experience of such things knows fully well that this was not something uncontrollable, not the result of a trance or ecstasy, and certainly not emotionalism; the speaking was subject fully to the self-control of each one who spoke in those other tongues; the words themselves were known to those foreigners who heard the word of God each in his own native tongue.

“Now when this was noised abroad, the multitude came together, and were confounded, because that every man heard them speak in his own language. And they were all amazed and marvelled, saying one to another, Behold, are not all these which speak Galilæans? And how hear we every man in our own tongue, where in we were born? Parthians, and Medes, and Elamites, and the dwellers in Mesopotamia, and in Judæa, and Cappadocia, in , and Asia, Phrygia, and Pamphylia, in , and in the parts of about , and strangers of . Jews and proselytes, Cretes and Arabians, we do hear them speak in our tongues the wonderful works of God.” 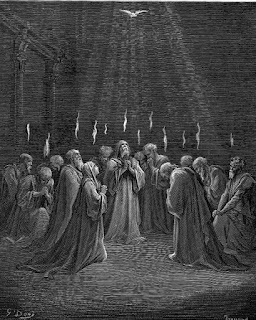 What were these tongues (γλῶσσα, glōssa) that we read about? How did they serve as a sign for unbelievers? Why did God choose a thing that seemed so weak and foolish that onlookers were filled with derision expressed in mocking words: "Others mocking said, These men are full of new wine." The Scripture goes on to say, "But Peter, standing up with the eleven, lifted up his voice, and said unto them, Ye men of Judaea, and all ye that dwell at Jerusalem, be this known unto you, and hearken to my words: For these are not drunken, as ye suppose, seeing it is but the third hour of the day (Acts 2: 13-15).” The many disciples spoke mysteries to God (I Cor. 14:2), understood by none of the local men. But to those who heard the truth spoken in their own tongues, by men who never learned to speak them (but were simply given utterance of praise and thanksgiving) for "the wonderful works of God," this was not a thing to be treated with contempt, but with fear. It was a sign. The division of mankind into different nations through the confusion of tongues at , was a curse that is undone within the Church. In Christ we are one Body, gathered by one Spirit from the four corners of the earth.

“And they sung a new song, saying, Thou art worthy to take the book, and to open the seals thereof: for thou wast slain, and hast redeemed us to God by thy blood out of every kindred, and tongue, and people, and nation; And hast made us unto our God kings and priests: and we shall reign on the earth (Rev.5:9,10).”

Peter had no trouble identifying what had happened, and doing so from Scripture:

“But this is that which was spoken by the prophet Joel; And it shall come to pass in the last days, saith God, I will pour out of my Spirit upon all flesh: and your sons and your daughters shall prophesy, and your young men shall see visions, and your old men shall dream dreams: And on my servants and on my handmaidens I will pour out in those days of my Spirit; and they shall prophesy (Acts 2:16-18 quoting Joel 2:28).”

Peter had changed. He had been a natural man (ψυχικός psychikos-soulish) unable earlier in his life to understand why the Christ, the Son of the Living God, was ready and willing to take up the cross; later he was afraid and denied the Lord three times. But, now he stands on his feet boldly, not afraid of death, having his mind focused on the truth, able to understand and know from Scripture everything that had unfolded and was unfolding. He had been a disciple for more than three years, but now was closer to Christ than at any time when he beheld him with the eyes; for he was now part of the Body of which Christ is the Head. Many a time Peter had stumbled and tripped over his own tongue, and had failed to speak the right words on the night in which his Lord was betrayed. But, now he spoke with more clarity, more power and more authority than any prophet of the Old Covenant. He delivered the first Christian sermon, as he was now the fisher of men Christ had foreseen; his dragnet of words brought in about three thousand souls. The young Church, the Body of Christ brought forth in a day, thrived with healthy vital signs.

None of this was man-made. The best efforts of organization could not have produced it; the most detailed planning could not have pulled it off. No human effort could have brought it forth in a day, because the nation created on the Day of Pentecost was chapter two of the Word made flesh. The Body of Christ now came into the world.

We know from the end of the Gospel of Luke that the disciples were forbidden to take this work on themselves prematurely, as if it depended simply on human power and wisdom.

“Then opened he their understanding, that they might understand the scriptures, And said unto them, Thus it is written, and thus it behoved Christ to suffer, and to rise from the dead the third day: And that repentance and remission of sins should be preached in his name among all nations, beginning at Jerusalem. And ye are witnesses of these things. And, behold, I send the promise of my Father upon you: but tarry ye in the city of , until ye be endued with power from on high (Luke 24:45-49).”

Frankly, in light of the foolishness of sinful men, it is very obvious that God's power and grace have never depended on anyone less than God Himself. Never think that we, as the Church, have succeeded in anything simply by our own human cleverness, or our best laid plans, or our own strength. We have an organized structure, but the permanent shape of that structure was revealed and enacted by the Holy Spirit. The whole life of the Church is charismatic (χάρισμα); from the receiving of Scripture to the Sacraments, from the Apostolic Succession to the faithful service of each member.

Indeed, , speaking in the context of spiritual gifts, even goes as far as to call the Church by the name of Christ Himself:

So, I have not spoken carelessly in saying that the Church is part two of the Incarnation. The Jesus who goes about now doing good and healing is none other than the Body of Christ and members in particular. He does his work through you, through His Body the Church, by the Holy Spirit, the other Comforter who is with us and in us.

The day of Pentecost was a feast in the Law of Moses when the first sheaf of the harvest was waved before the Lord. It was also the same day that the Lord had descended on Mount Sinai, when the whole nation of heard the voice of God as He spoke his ten commandments. Therefore, it is quite fitting that the Lord Jesus foretold the outpouring of the Spirit in terms of his commandments. "If ye love me, keep my commandments. And I will pray the Father, and he shall give you another Comforter, that He may abide with you for ever; even the Spirit of truth." Therefore, if we remain faithful to him, we continue to take part in His Incarnation as the Church, the Body of Christ. For His Spirit not only comes upon us, but abides within us always.

Pentecost was known as both the Feast of Weeks and the Feast of Harvest or Firstfruits in the Old Testament. The beginning of the spring grain harvest in ancient Israel was marked with a ceremony in which the waving of the first sheaf of grain was done by the priest, as an offering to God. It was only after that first sheaf (or firstfruit) was offered, that the people were allowed to eat any grain of the harvest. In I Corinthians 15:20, Christ, risen from the dead, is called "the firstfruits of those who have fallen asleep."

Firstfruits indicates an initial harvest that is to be followed by another harvest. In the OT, the physical harvest prefigured the spiritual harvest that was to come. Hence it is no surprise that during the Last Supper Christ broke bread and distributed it to his Disciples, calling the Bread His Body, for indeed it was and IS. "The hour has come that the Son of Man should be glorified. Most assuredly, I say to you, unless a grain of wheat falls into the ground and dies, it remains alone; but if it dies, it produces much grain" (John 12: 23,24).

As the wave-sheaf offering of ancient Israel prefigured Christ, on Pentecost two loaves of bread, "the firstfruits to the LORD" were offered (Leviticus 23: 16, 17). These loaves are God's spiritual firstfruits, those who are called to faithfully obey God in this life (James 1:18). That would be us!