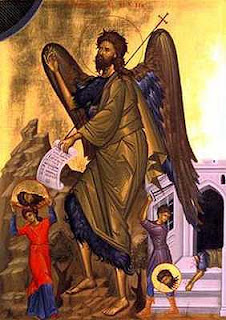 In the Eastern tradition, icons of John often show him with angel's wings. This is because of the book of Malachi. "Behold, I will send my messenger, and he shall prepare the way before me: and the Lord, whom ye seek, shall suddenly come to this temple, even the messenger of the covenant, whom ye delight in: behold, he shall come, saith the LORD of hosts." (Malachi 3:1)

The term "My messenger" is actually the name of the book and of the prophet whose words are recorded in it. Malachi (מלאכי) means "my messenger" or "my angel." This is significant, because Malachi was thought of as the last of the prophets, not last as in final, but the last to have appeared. The book is telling us that the final Old Covenant prophet, the true Malachi, will appear. So we see the ending of the book, the last part of chapter 4: "Behold, I will send you Elijah the prophet before the coming of the great and dreadful day of the LORD: And he shall turn the heart of the fathers to the children, and the heart of the children to their fathers, lest I come and smite the earth with a curse."

But, we know that the prediction about Elijah referred, rather, to the one whose coming would be "in the spirit and power of Elijah." So we hear the words of Gabriel to the priest Zechariah, John's father: "And he shall go before him in the spirit and power of Elias, to turn the hearts of the fathers to the children, and the disobedient to the wisdom of the just; to make ready a people prepared for the Lord." (Luke 1:17) This is why our Lord said, "Elias truly shall first come, and restore all things. But I say unto you, That Elias is come already, and they knew him not, but have done unto him whatsoever they listed. Likewise shall also the Son of man suffer of them. Then the disciples understood that he spake unto them of John the Baptist." (Matt. 17:11-13. I have never understood why so many Eschatology enthusiasts simply don't believe what Jesus said).

John's parallel with Elijah is stunning. Ahab and Jezebel could not kill Elijah, but the Ahab and Jezebel of John's day, Herod and Herodius, "have done unto him whatsoever they listed." John turned the hearts of the people back to the God of their fathers, just as Elijah had done when confronting the prophets of Ba'al (I Kings chapter 18, especially v.37: "Hear me, O LORD, hear me, that this people may know that thou art the LORD God, and that thou hast turned their heart back again."). This was done by restoring the hearts of the children to the fathers, a unique phrase in scripture since it is the only verse with the commentary, or interpretation, of an angel from heaven. To have our hearts turned to the fathers means that they are turned to "the wisdom of the just."

To be turned to the wisdom of the just, to the fathers, requires the humility that it takes to learn from those who have known God and have gone before us. It means to learn from the Tradition that teaches the meaning of scripture, rather than arrogantly dismissing it in favor of our own ideas. To echo Hooker, this is the Reason and wisdom of the Church with her authority, having passed on to us the scriptures along with the key to understanding them.
It means to accept the "democracy of the dead" as G.K. Chesterton put it: "Tradition means giving votes to the most obscure of all classes, our ancestors. It is the democracy of the dead. Tradition refuses to submit to that arrogant oligarchy who merely happen to be walking around." - Orthodoxy, 1908

It means also that Christians bend an obedient ear to learn from those whose office it is to teach the word of God. "Obey them that have the rule over you, and submit yourselves: for they watch for your souls, as they that must give account, that they may do it with joy, and not with grief: for that is unprofitable for you." (Hebrews 13:17) Even if you really think the priest to be unworthy, bend your ear when he teaches the word of God.

John's baptism, the ritual bath from the Law of Moses, was applied to every Jewish person who came to him to confess and repent, and be forgiven. This ritual bath, baptism, was part of the process of conversion for Gentiles to Judaism, to wash away uncleanness. His message to his own people was clear: Convert back to the God of your fathers. John was a priest by birth, but his life away from the earthly temple in Jerusalem, as a prophet in the wilderness, spoke of the New Covenant that was soon to be established in the blood of the Son of God (Hebrews 8:13). A people prepared for the Lord will not be harmed by his Presence when the Lord suddenly comes to his temple, that new place where "we have an altar" (Hebrews 13:10). Rather, they will feed on Him as the food and drink of eternal life.
Posted by Fr. Robert Hart at Friday, June 22, 2012

Thank you Fr. Hart. A nutritious teaching to begin the day with.

I wonder how many Anglicans forgot to celebrate the saint's day last Sunday and did that after Trinity instead? And would they have the courage to confess it?

'
And just who mugged poor St. Peter? Or is he out of style today with Anglicans?