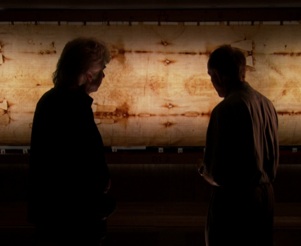 Ray Downing and John Jackson, a physics lecturer at the University of Colorado who runs the Turin Shroud Center of Colorado (photo courtesy History Channel)

The blood (stain symmetry, type and other indicators) on the Sudarium matches the blood on the Shroud.


There are many points of coincidence between all these points and the Shroud of Turin - the blood group, the way the corpse was tortured and died, and the macroscopic overlay of the stains on each cloth. This is especially notable in that the blood on the Sudarium, shed in life as opposed to postmortem, corresponds exactly in blood group, blood type and surface area to those stains on the Shroud on the nape of the neck. If it is clear that the two cloths must have covered the same corpse, and this conclusion is inevitable from all the studies carried out up to date, and if the history of the Sudarium can be trustworthily extended back beyond the fourteenth century, which is often referred to as the Shroud's first documented historical appearance, then this would take the Shroud back to at least the earliest dates of the Sudarium's known history. The ark of relics and the Sudarium have without any doubt at all been in Spain since the beginning of the seventh century, and the history recorded in various manuscripts from various times and geographical areas take it all the way back to Jerusalem in the first century. The importance of this for Shroud history cannot be overstressed. (You may read this whole article here).

So, you think you can just ignore the evidence discovered at Nag Hamadi?

No. The discovered library was evidence--evidence of what we had already known for a long time; that Gnostic manuscripts were composed in the Third Century AD, and fictionally attributed to much older, long departed, sources. So, it was evidence, but not of anything to do with the real Jesus.

I watched the show and liked it a great deal, especially the work with the shroud. When talking of Nag Hamadi, it was mentioned the manuscripts were written in Coptic and that the original Greek texts have never been found. So, in this case, you would have only the translation of a source as your source which makes them not as credible as the books which do have original source material, no?

It's like going through the Church's household garbage 2,000 years after the fact, digging out all the theological junk mail, and crying out "Aha! So, what have we here? What were they trying to hide?"

An evangelical ministry called Radio Bible Class has a Sunday morning TV program called "Day of Discovery" that recently aired a series about the veracity of the Gospels. One of the participating academics made the observation that anyone with honest doubts about the "hidden gospels" should read them in their entirety and compare them to the canonical gospels. One quickly sees that the faux scholars who are touting these "gospels" at the expense of orthodox faith don't know what they're talking about.

Were we to pay attention to the more comprehensive picture of the origins of the Proto-Gospel among Abraham's Nilo-Saharan ancestors, we could more easily point out the difference between faux science and good science as it applies to the Gospel.