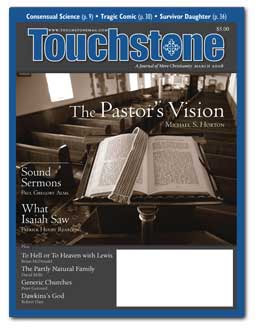 (Dawkins' God originally appeared in the March 2008 edition of Touchstone, a Journal of Mere Christianity)

If Richard Dawkins wants to refute what Christians believe, he should not declare his own belief in Divine Transcendence. Time Magazine recently asked him and Francis Collins, a Christian who heads the Human Genome Project, what caused the universe to exist and suggested that the answer could be God.

Dawkins answered: “There could be something incredibly grand and incomprehensible and beyond our present understanding,” To this Collins responded “That’s God.” Yes, said Dawkins,

but it could be any of a billion Gods . . . the chances of its being a particular God, Yahweh, the God of Jesus, is vanishing small — at least the onus is on you to demonstrate why you think that’s the case. . . . I don’t see the Olympian Gods or Jesus coming down and dying on the cross as worthy of that grandeur. They strike me as parochial. If there’s a God, it’s going to be a whole lot more incomprehensible than anything that any theologian of any religion has ever proposed.

How is this an argument against the Christian faith? (By the way, what does Dawkins mean by “our present understanding”? Does he anticipate some future state of exaltation and glorification that will increase it?) Furthermore, Dawkins has been a favorite of atheists for a long time, and yet here he clearly professes agnosticism. And, what he is agnostic about is revelation.

In the Bible we read of God who dwells in the darkness and of God hidden by the radiance of blinding light. St. Paul writes of “the blessed and only Potentate, the King of kings, and Lord of lords; Who only hath immortality, dwelling in the light which no man can approach unto; whom no man hath seen, nor can see” (I Tim.6:15, 16).

In the first of his Soliloquies, St. Augustine writes of God as “incredibly grand.” The entire tradition of Apophatic theology is about God who is beyond our understanding. God is spoken of in negatives, because we cannot know the Nature that is Wholly other than every created nature, infinite, without beginning or end.

Dawkins believes that “The chances of its [this incomprehensible God] being a particular God . . . is vanishing small.” Yet the Transcendent and incomprehensible God beyond our knowing whose possible existence he concedes is a particular God, and quite in keeping with the one element that he actually brings into question: Have we been given the complement of the Divine mystery, namely, revelation?

Theology is, though the modern mind may find this astonishing, a science. It is based on statements of fact, including miracles. The Christian faith takes its stand on one thing above all, the eyewitness accounts of those who saw the resurrected Christ.

This is strengthened in its status as actual history by the martyrdom of the earliest witnesses. What stands as a unique event in history is not merely an empty tomb, and not the story of the resurrection, but the deep conviction of the earliest Christians that Christ’s post resurrection appearances were events real enough to die for.

This provides for us a fact to consider, namely that what we have, not only a particular God, but specific revelation, is the opposite of “vanishing small.” Instead, it is quite substantive on the basis of evidence.

In terms of this revelation, the post resurrection appearances verify the teachings of Jesus, as recorded by eyewitness accounts, and lead to our central doctrine, the Incarnation. Dawkins fails in his attempt to criticize Christian teaching because he describes the very opposite of what we believe.

“I don’t see the Olympian Gods or Jesus coming down and dying on a cross, as worthy of that grandeur,” he tells the magazine. Here we can sympathize with him, because some theologians have made too much of St. Paul’s use of the Greek word kenoo to mean that Jesus “emptied himself” into human nature.

TAKEN UP IN CHRIST

Never has the Church taught it this way. Always, the revelation has been understood to be that Jesus Christ is God the Word (Logos), or God the Son, having taken finite human nature into His infinite being, time into eternity, mortality into life, created nature into uncreated Person, the known into the unknowable. “God was made man that man might become God,” as St. Athanasius wrote in his On the Incarnation.

Although Dawkins asserts his estimation of the crucifixion of Christ as unworthy of Divine grandeur as a crushing criticism of Christianity, it is simply an echo of St. Paul’s words. “For the Jews require a sign, and the Greeks seek after wisdom: But we preach Christ crucified, unto the Jews a stumblingblock, and unto the Greeks foolishness; But unto them which are called, both Jews and Greeks, Christ the power of God, and the wisdom of God. Because the foolishness of God is wiser than men; and the weakness of God is stronger than men.” (I Corinthians 1:22-25).

Unworthy of Divine grandeur indeed; that was the point.
Posted by Fr. Robert Hart at Wednesday, August 25, 2010

Wow -- an argument against Christianity on the ground that "our" God is too comprehensible!!! The Greek Fathers must be rolling their eyes collectively!

That would be "Dawkins' God", would it not?

Dawkins is no more than a weak undergraduate where theology is concerned. But he has discovered how to make large amounts of money out of the process.

Bang on the money, Father. Dawkins is a philosophical illiterate who knows nothing about the Christian religion he so confidently and arrogantly ridicules. Thank you for this valuable piece.